This guidance is effective from 1 January, 2020


What is permanent grassland

Permanent grassland and permanent pasture (together referred to as permanent grassland) means land used to grow grasses or other herbaceous forage naturally (self-seeded) or through cultivation (sown) and that has not been included in the crop rotation of the holding for five years or more.

For clarity, areas declared as Permanent Grassland (PGRS), Rough Grazings (RGR) or Open Woodland (grazed) (WDG) are all included within permanent grassland for the purposes of the Basic Payment Scheme and Greening.

All unimproved semi-natural areas are already protected by:

These grasslands cannot be improved without first determining whether an Environmental Impact Assessment (EIA) is required.

All farmers, including those farming organic land, are required to comply with Environmental Impact Assessment and Cross Compliance rules regarding ploughing of permanent grassland. If you have land in Sites of Special Scientific Interest (SSSIs), you must also observe site requirements that may apply to grassland habitats on the site.

If you want more information about this you should contact your local area office.

Pictures above: examples of permanent grassland

From 2015 onwards, the regulations require that the ratio of permanent grassland compared to the total agricultural area claimed must not decrease by more than five per cent. The maintenance of this ratio will be monitored at a national level and it is only if there is a reduction in the ratio the Scottish Government will take action to increase the area of permanent grassland.

Your additional business requirement for Greening

As part of the Scottish Government's contribution to the mitigation of climate change, and to improve the efficiency of Scottish agricultural businesses, farmers will be required to maintain a record of their intentions regarding the application of inorganic nitrogen fertiliser and lime.

All claimants for the Basic Payment Scheme wishing to receive a Greening payment must complete an annual nitrogen fertiliser and lime plan for fields of permanent grassland.

An example template of a permanent grassland nitrogen fertiliser and lime plan can be found in Annex C.

* If you are within an NVZ and are retaining a suitable annual fertiliser plan, this meets the Greening requirement for these parcels. Noting, you may need to annotate your NVZ records as to whether you intend to add lime or not on a given parcel.

Further guidance on the use of nitrogen fertiliser and the links to the application of lime to change the pH status of soil and improve the uptake of inorganic fertiliser can be found in Annex C.

In addition, individual businesses must not convert or plough permanent grassland designated as Environmentally Sensitive Grassland (ESG) on their holding.

In Scotland, Environmentally Sensitive Grasslands have been defined as NATURA designated sites where land managers will already be bound by the existing specific management agreements in place to ensure they are protected and managed sympathetically.

You can check the ESG on your holding using ‘View only maps’ when you log in to Rural Payments and Services.

What permanent grassland requirements apply to me?

Use our flowchart below to see what applies to you. 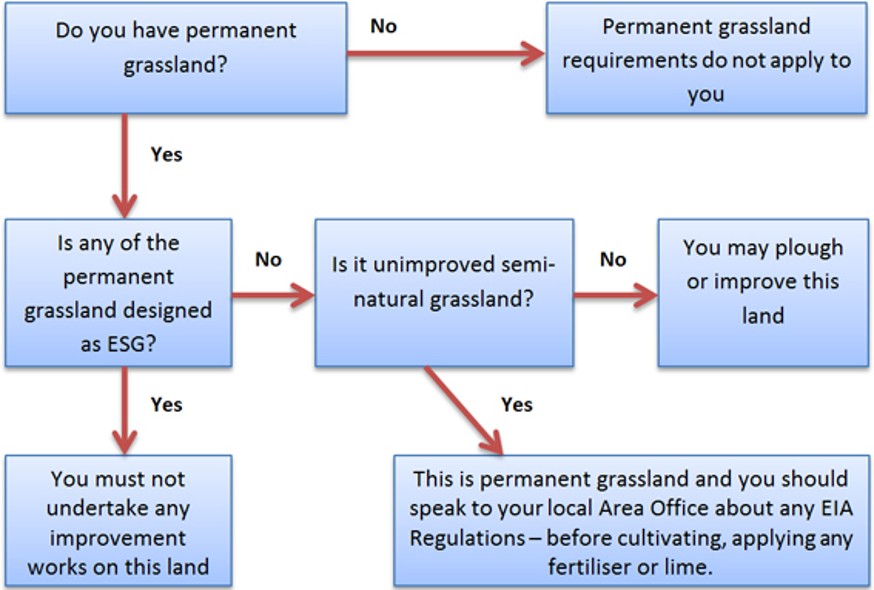 What is temporary grassland?

Temporary grassland is land that has been in grass or other herbaceous forage for five years or less.

How to claim your new grassland

There are four traditional ways of establishing a temporary grassland sward:

If the land remains in grass for a number of years following establishment, it should be entered on the Single Application Form as follows: